Based upon the sales this week, it’s time to get your Irish recipes out!  Which, I only have one – Corned Beef and Cabbage. I like corned beef, but I don’t like Reuben sandwiches.  I think it’s the Rye bread.  And the dressing.  But, you know, other than that, I would like them.  Instead, we just make corned beef and cabbage.  Keeping it simple!

This last week, I made Taste of Home’s Firefighter’s Chicken Spaghetti and I’m so glad that I did!  I finally found a chicken spaghetti recipe that I like!  I modified it a bit (basically not to include a crust topping and to include bell peppers) and simplified the instructions, but I’m sure the original would be great too. 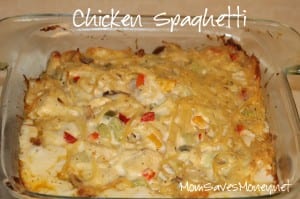 Since this made a 9×13 pan, I went ahead and made 2 9×9 pan out of it.  One went into the oven for dinner and one went into the freezer for later.  When we’re ready for it, I’ll defrost it in the fridge overnight and then bake for a little longer.