For my family, I make one batch and use a 9×9 pan to get 2 casseroles. I freeze one and bake one. One half of this recipe will still get my young family 2 meals. And leftovers are awesome! 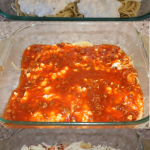 Do those layers all over again:

You can freeze either baked or unbaked. I prefer unbaked. Either way, let cool, then wrap tightly in freezer-friendly container. I also wrap it again with foil and plastic wrap. To bake after freezing, defrost overnight or during the day and add at least 15 minutes of baking time.